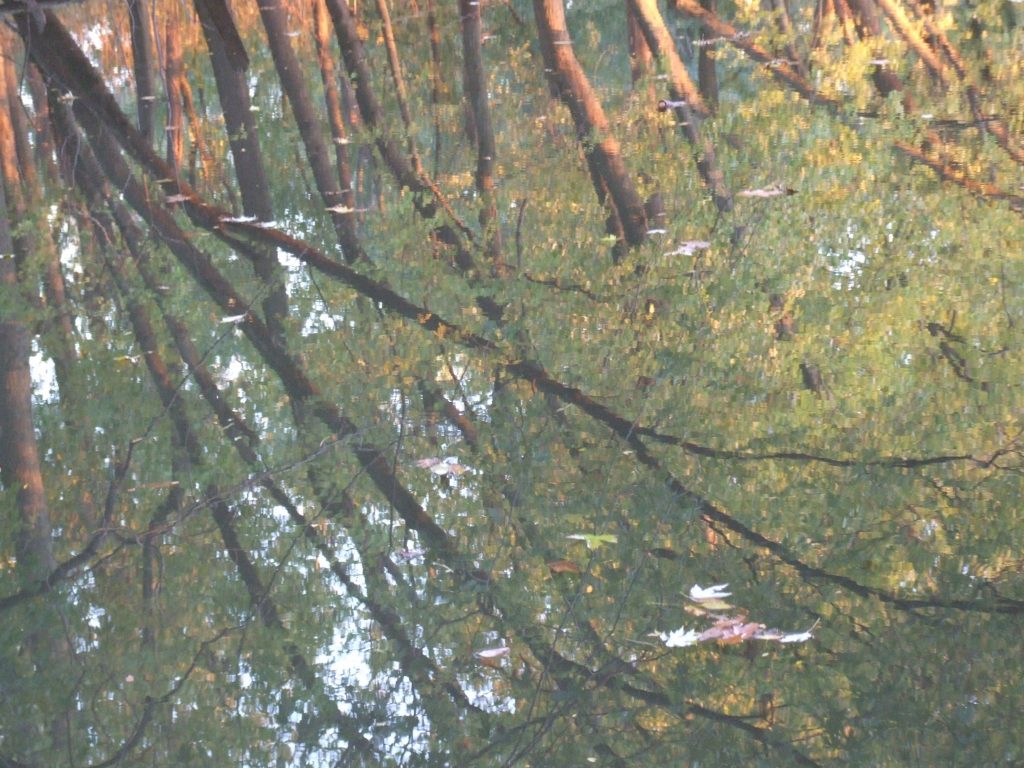 Thank you for coming by.

Thousands of candles can be lighted from a single candle, and the life of the candle will not be shortened. Happiness never decreases by being shared.
~Buddha

(I don’t think he used the common era notation, however.)

Scientific American blogged about it, so it must be true.

And the Globe and Mail gave Ussher some good words. 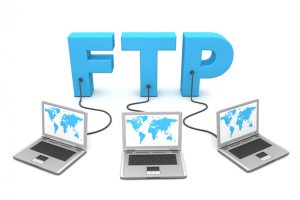 A couple of us started getting nagged by our computers about running out of disk space. We’re both running Mac High Sierra; 15% free disk space is required, which on our 500 GB ssd drives is 75 gig.

After cleaning off files and running clean-up utilities (lost my browser history; I’m sure that was a space hog <eye roll>), I still had only about 50 gig free. Then I found a huge Photos library on each machine—over 300 gig each.

No biggie. I threw money at it by buying a couple 4 TB external drives and started copying the files over. Which would work until like 50 gig from the end or something like that and then quit, complaining about running out of application memory. With no apps running but Finder.

I even tried using Terminal to copy the files. I don’t know why I thought it might work—I was opening an additional app. Turns it’s wonderfully easy to copy files in Terminal: type cp at the prompt then drag the file into the window then drag the destination into the window and hit Return.

But it didn’t work. I’m not really sure why.

The google machine told me that High Sierra has a bug in the copy huge file process. But I have an older computer running Sierra with lots of disk space. So I ran an ethernet cable between the two computers and tried a basic Finder copy from one to the other.

I realized I’d initiated the copy from the “wrong” computer and stopped the process to initiate it from the other computer. I ran Disk Utility on my old computer hard drive just to play it safe and it found an unrepairable defect. Even in Recovery mode, it was unrepairable. And the machine wouldn’t reboot from Recovery mode.

I <3 Macintosh computers. I just had to boot into Recovery mode again (Cmd-R on bootup, until you see the Apple). Used Disk Utilities to erase the hard drive, then reinstalled the system.

Now I really have space on that hard drive.

It’s easiest if you can remotely log into the High Sierra as the owner of the Photos library file; otherwise, give the user Read/Write access. (Read Only is not good enough to write the file to another computer.)

I used wireless networking (so that the High Sierra machine was still in touch with the world) and it took forever, but it worked. I was able to FTP the huge Photos libraries over to the Sierra machine and then out to external drives from there.

After I deleted the huge Photos library from my hard drive, I ran Disk Utilities, which ended by saying I had like 50 gig free. What?! One of its pieces of information was that there was 350-plus gig free (300-some purgeable).

I brought up About this Mac, the Storage tab, and saw it almost full then sort of sparkle, eventually ending up with 350-plus gig free. Success! 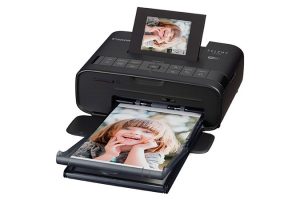 I picked up a Canon Selphy CP1200 photo printer.

It’s a dye sublimation printer, meaning you have a roll of cellophane ribbon instead of ink. The 4×6 pictures it produces look pretty good.

There is a small variety of papers: 4×6 glossy photo, 4×6 postcard, and square stickers. I’ve only tried the photo paper.

The first photos I printed were from my smartphone, and that went well.

I haven’t figured out how to connect my MacBook via AirPrint. Probably boneheadedness on my part and Canon’s email support only parroted the instructions found elsewhere.

I’m using this machine to pass on Facebook photos to someone who doesn’t use a computer, and printing FB pictures from a USB thumbdrive was hit and miss for me. The Selphy is pretty particular about the format of the jpegs it prints; many photos showed question marks on the screen even though they contained thumbnails, and they wouldn’t print.

If you are also facing this problem, the easiest solution is to export the pictures from Photoshop or the open source version, Gimp.

When exporting jpg in Gimp, be sure to use the following options:

These choices will come up after you select jpg and say save, yes replace.

I’ve had no problems since following this process.

You Can Now Drink and Throw Axes at This Gowanus Bar

Pearls is a tavern in Emohen, WI, but its axe throwing arena isn’t this spiffy. It’s more real world.

Check it out in my book.
(See sidebar for free ebooks of Chrome Cady.) 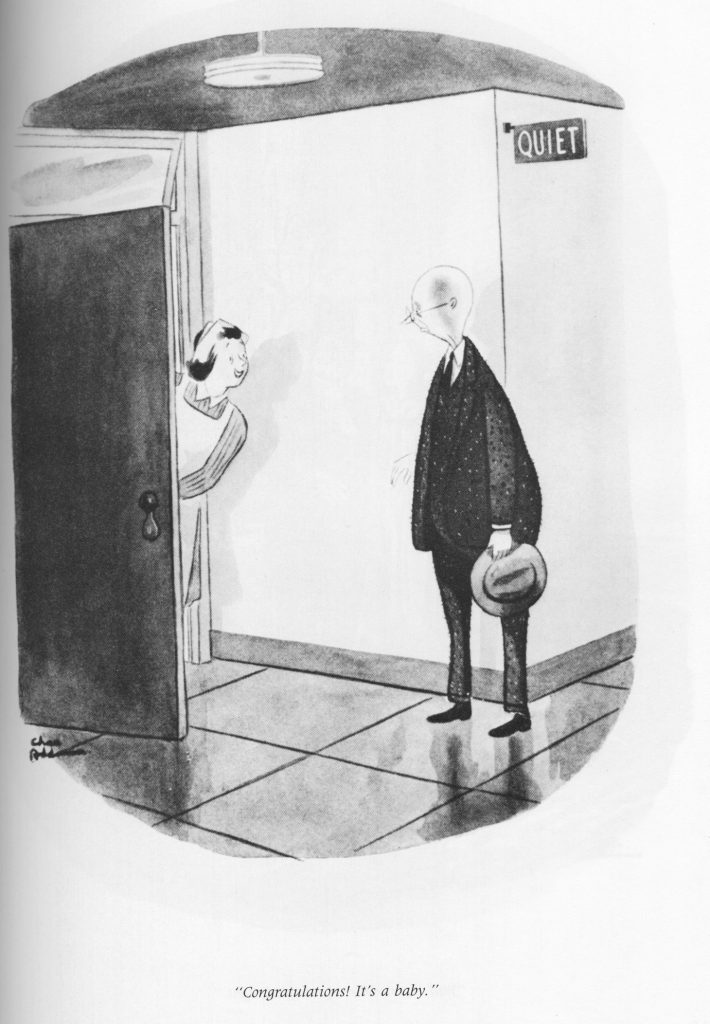 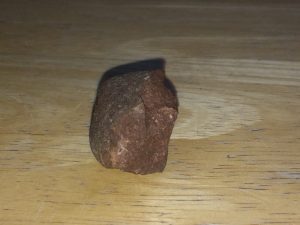 I seem to find red rocks when I’m filled with your energy.

This one has sharp edges. Have you broken away? 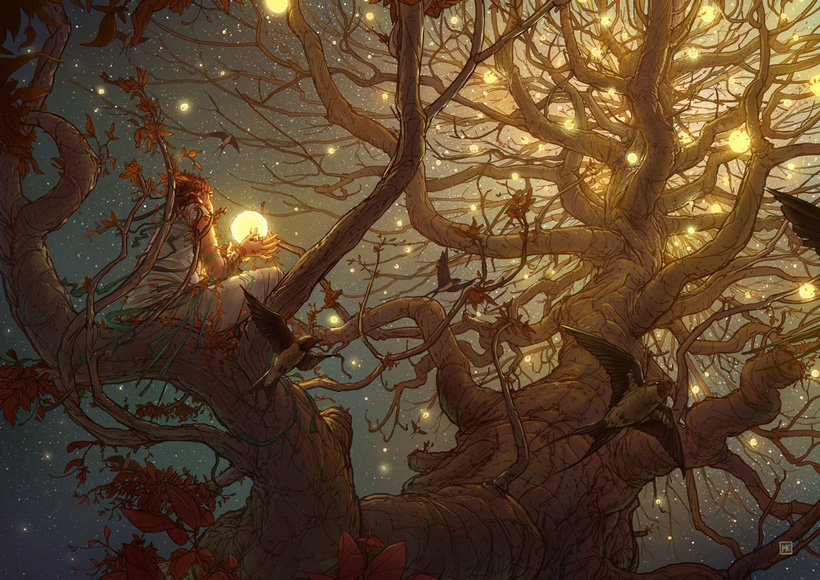 Those who know tell me that you’ve withdrawn a house-size amount of money. Have you found a place? Have you stopped running?

My heart brims with hope.

Hey now! Put Your Lights On! 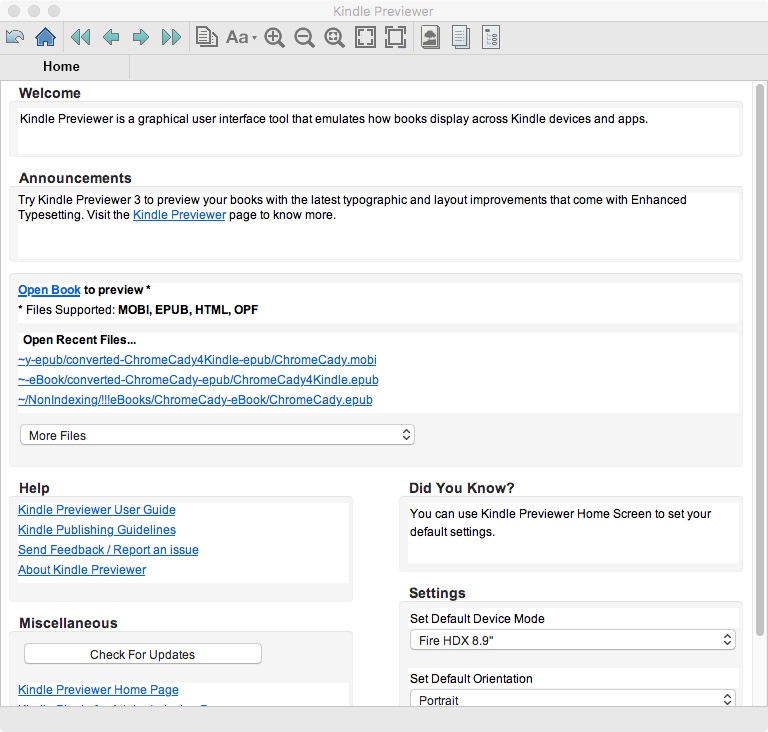 Do you know about KindlePreviewer? It’s a free utility from Amazon.

It will convert epub files to mobi, the format used by Kindles.

It also will emulate a variety of Kindles so that you can see what your ebook will look like on the various devices. 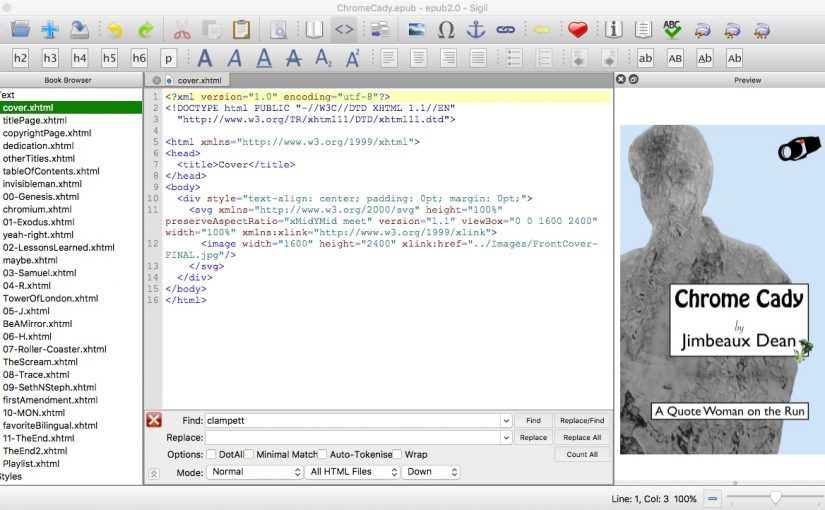 I’m doing these epub posts bass-ackwards, but that’s no surprise to anyone who knows me.

So how did I correct the problems with my epub file reported by Pagina epub checker? How did I prepare the epub file in the first place?

Ladies and gentlemen, meet Sigil. If you google sigil you get this wonderful definition:

an inscribed or painted symbol considered to have magical power

But what I want you to do is to google download sigil and look for a reputable site from which to download the epub editor.

Once you have it installed, come back here . . .

Okay, so now you have Sigil.

See, an epub (or a mobi) is just a zip file of the content html file and all the support files. If you want to check this out, just change the suffix of any epub or mobi file to zip and check out the contents.

Sigil guides you toward creating separate files for each of the chapters and guides you in creating the cover jpeg— you still need to supply an image of the right size.

You can load a validator into Sigil, but I used epubcheck (see previous post on validating epubs), which provides the file name and line number of any problematic code. You go into Sigil and fix the problem just like that: surgical strike.

See, an epub or Kindle is mainly html code, probably assisted by a css style sheet, which Sigil guides you toward.

If you’re building your own epub, you want Sigil.

And do you know about Kindle Previewer? It will convert an epub file to mobi, which is the Kindle format. And it will let you preview the mobi file in the various Kindle capabilities.

I think that covers it, but I’ll add anything if I think of it. 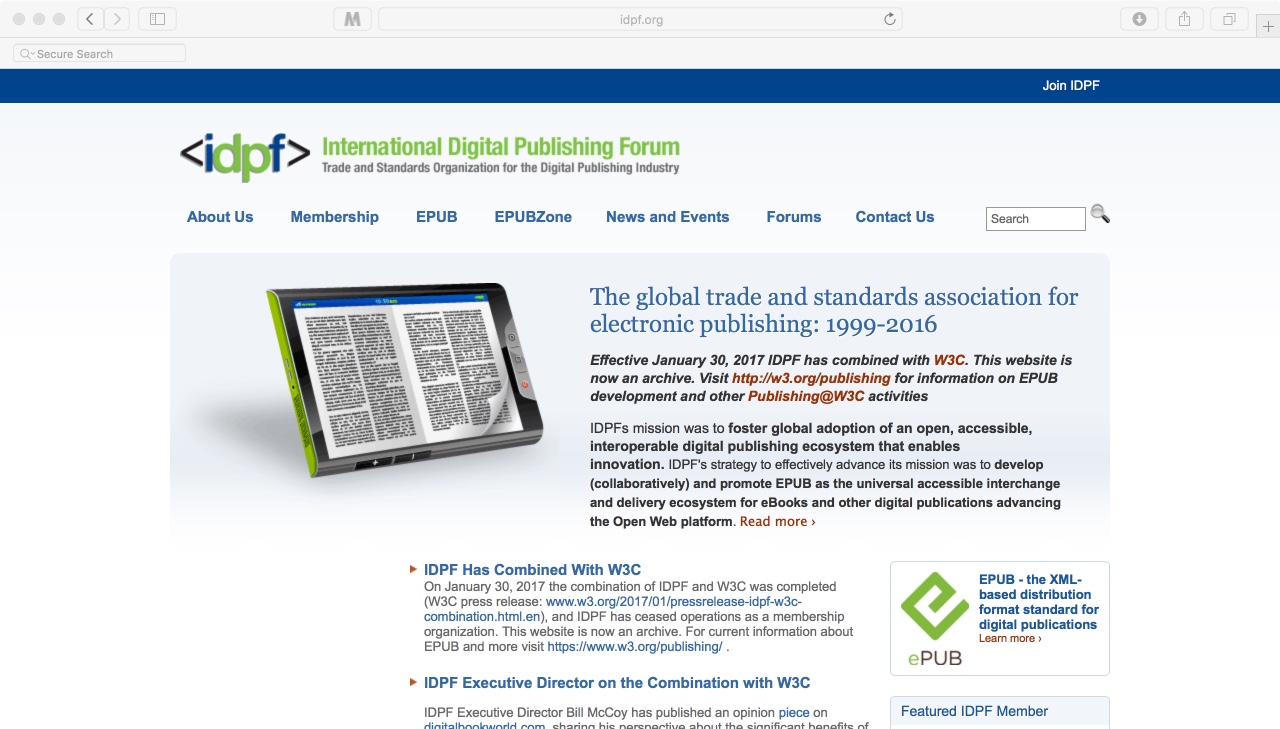 The image is of the homepage for
IDPF: The International Digital Publishing Forum
http://idpf.org

If you decide to distribute your epub through Smashwords, it will get validated, and Smashwords will not list your epub until it passes validation. But the errors they provide are of little help.

You want to run your epub file through a utility called epubcheck to validate it and receive error feedback that’s helpful. There’s an online version available at

You can run a version on your desktop by grabbing the Open Source utility epubcheck.jar and installing Java on your computer.

GitHub is a source for the zip file and has a wiki on epubcheck:

For the .zip file:
https://github.com/IDPF/epubcheck/releases

Okay, so now you’ve got epubcheck.jar. You need Java to run it on your linux or windows or macintosh computer. You’re probably best off googling java download to get the most recent info for your situation.

For Windows 10, the FAQ:
https://www.java.com/en/download/faq/win10_faq.xml

For Macintosh Sierra, the FAQ:
https://www.java.com/en/download/faq/sierra_java.xml

If you’re running Linux, you’re too cool to need my help.

Okay so now you’ve installed Java on your computer.

This gives you the ability to run a .jar file from a command line.

So Windows people bring up the Run command line and enter something like:

Mac users go into the Utilities folder in Applications, launch Terminal, and . . .

I’ll tell ya. I don’t know what we Mac people do at this point, ’cause this is when I went to the GUI page of the epubcheck wiki:

where I learned about Pagina epub checker:

And here is where I’m at, about to fix the nine errors in my epub file.

Edit:
What errors? My epub is now valid.

Pagina epub checker gives you the file name and line number of each error, making it easy peasy to fix the problems.

I now have valid epub and mobi files on this site. 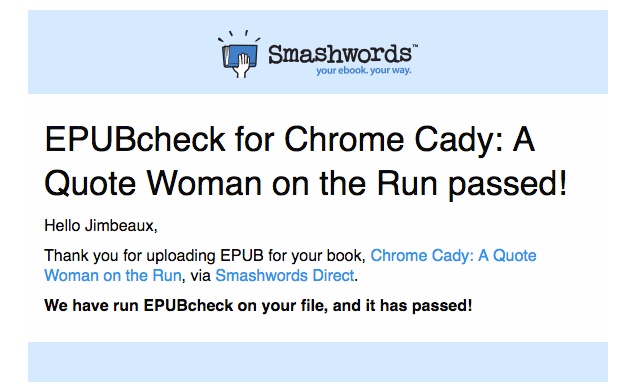